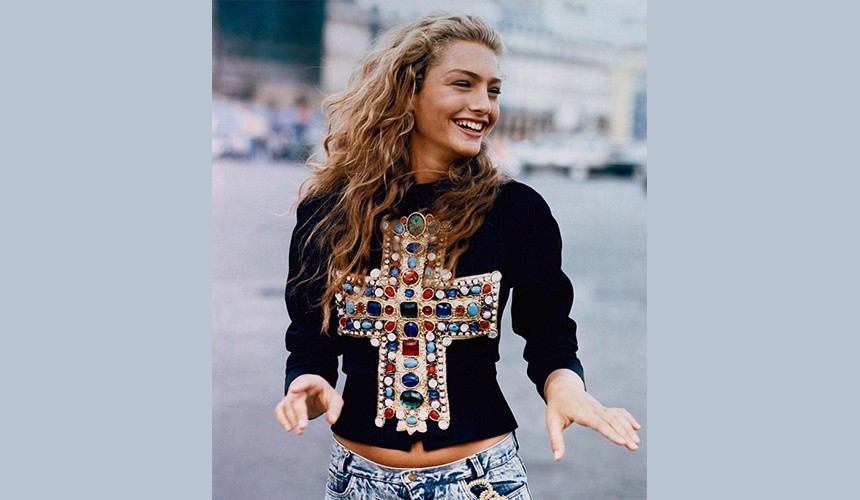 Vogue—it's a favorite around here and one of the inspirations behind our new resort collection. The shot, by Peter Lindbergh, is simple enough: model Michaela Bercu, all smiles and wind-swept hair, wearing stone-washed denim Guess jeans and a black Christian Lacroix jacket embellished with a gemstone cross. But think about when the magazine came out: November 1988. The image, so modern today, was absolutely revolutionary back then—a seismic shift from the studied formality that was the publishing norm.

This marked the first time—gasp!—jeans appeared on a Vogue cover and the first time anyone mixed high-low in such a brazen manner: $50 jeans with a $10,000 jacket. Also radical: the fact that the model was peering, eyes half-closed, off to the side and not straight at the reader. Even the magazine's printers called asking if there was a mistake. "I couldn’t blame them," Anna recalled years later, adding that the photograph was partially the result of happenstance. Bercu couldn't fit into the matching Lacroix skirt; she had gained a little weight from a recent vacation to her native Israel."Not that that mattered. In fact, it only served to reinforce the idea to take couture's haughty grandeur and playfully throw it headlong into real life and see what happened."

As for the connection to our resort collection, it's a subtle one: a few gemstone accents here, a few chain details there. What we loved, really, was the spirit the image captured: "It's so American," says the Veronicas, "refreshing, joyful and natural."