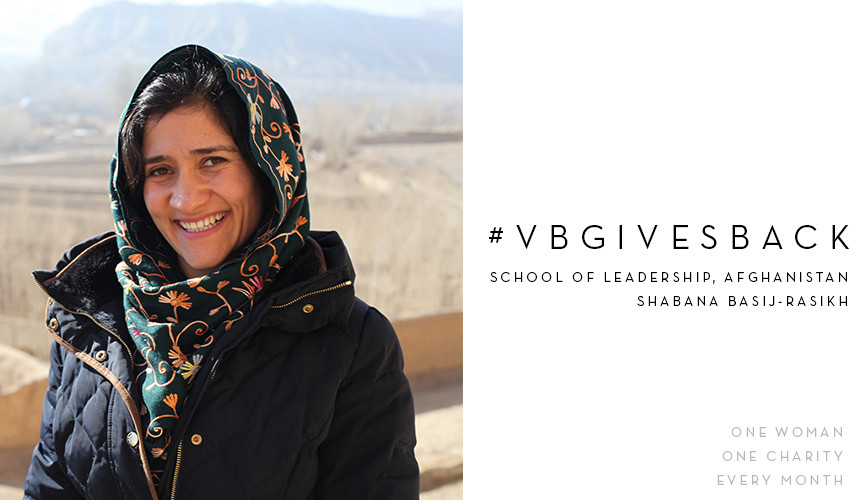 Shabana Basij-Rasikh was six years old when the Taliban came to power in Afghanistan and it became illegal for girls to attend school. Her parents risked everything to send her and her sister to a secret school in Kabul until the Taliban fell in 2001. Shabana attended college in the US, but never lost sight of the need in Afghanistan where 3 million girls are out of school. She returned home to found SOLA, the School of Leadership, Afghanistan, which is the first and only all-girls boarding school in the country. SOLA enrolls Afghan girls starting in 6th grade with the goal of raising the next leadership generation in Afghanistan.

Tell us about your education growing up in Afghanistan?

The Taliban came to power in Afghanistan in 1996, and one of the first things they did was make it illegal for girls to get an education. I was six years old, living in Kabul. My parents could have kept me home, but they didn’t. Secret schools for girls were opening around the city, inside people’s homes, where girls could receive an education.

My parents sent me to these secret schools, and it wasn’t long before my older sister was enrolled in one too – but the Taliban had also made it illegal for a woman to be out in public without a male chaperone. So, for several years until the Taliban fell in 2001, I dressed like a boy and escorted my sister to the secret school where we both studied. We put our schoolbooks in shopping bags, and our parents told us to tell anyone who asked that we were going to the market. We had to vary our routes, too, in case anyone got suspicious seeing us every day, so sometimes we walked almost an hour to get to school.
That ended when the Taliban were forced out of Kabul. Girls could come back to school and study openly, and of course that’s what we all did. 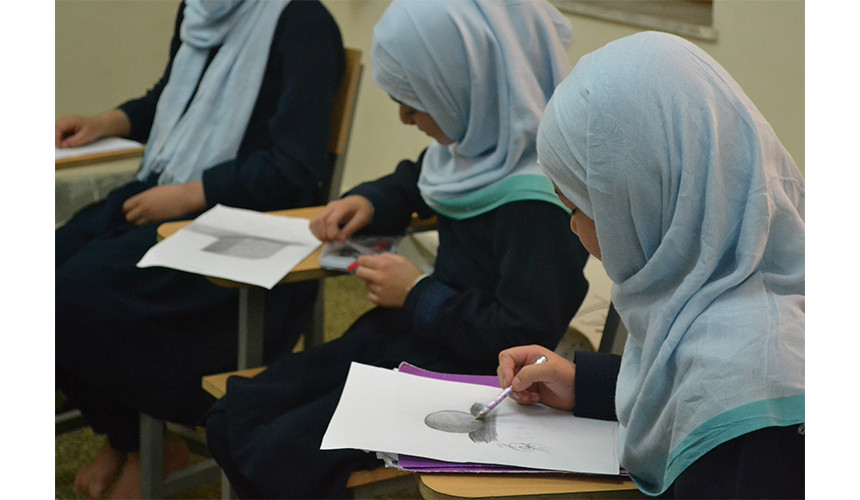 What challenges did you and other girls face?

The chief challenge, certainly, was that for six years while I was growing up, girls were forbidden from going to school. I was lucky to be able to study during those years; other girls weren’t so lucky.

I remember being in a school assembly after the Taliban fell. They had destroyed all the student records for girls, so we all had to take placement tests to determine which grade we should enter. I’d been in the equivalent of 1st grade when the Taliban came, and when we got our scores back – I remember this so clearly – I saw that I was going to be placed in the 7th grade…but my fellow 7th graders were all six years older than me. They’d been in 7th grade when the Taliban came, and now, six years later, they were going right back into the same grade. They hadn’t been able to study. They hadn’t had the chances I had. That was the moment when I realized, for the first time, what my parents had done for me.

How did your parents work to make your education possible?

I want to make something very clear: I don’t consider myself heroic for doing what I did during Taliban times. A lot of people think it was heroic, or think I was very brave – but the real heroes were, and still are, my parents. They’re the ones who were brave. Think about being a mother or a father, and sending your daughters off to school every day, and never knowing when they will come home…or if they will come home. But you send them anyway, because you know that education will be the key to a new life for them.

Of course, I can say that now – back then, that’s not what I thought at all. I thought they were the meanest parents on Earth! I remember coming home crying; I remember both of us, my sister and I, saying we were afraid and we didn’t want to go to school anymore. We begged them not to make us go. We thought they were so cruel. We had no idea how much they were risking for us.

What was it like to attend school in the United States?

I’ll tell you a story about that: I went to college at Middlebury in Vermont, but my first exposure to America was when I was still in high school. I spent a year living with a family in Wisconsin – and you can imagine, coming from Afghanistan, how different that was.

I remember, very soon after coming to stay with them, that my host parents told me about a trip the family was planning to take in about six weeks: they were all going to go to an amusement park, and they wanted me to go with them. And I was so amazed…not at the idea of an amusement park, which of course was something I’d never seen in person – but at the idea of planning to do something in six weeks. I remember thinking: “how do you know you’ll be able to go? How do you know something bad won’t happen and keep you from doing what you want to do?”
I’d never really experienced what it was like to live in peace. I’d never experienced what it was like to be able to make plans so far in advance. That was the really amazing thing about living, and going to school, in the U.S. – that, and coming to realize that so many people didn’t value educational opportunities the way I did. That’s not me being critical; they just didn’t come from the background I did. In America, girls’ education is a given. That’s not how it is in my country. 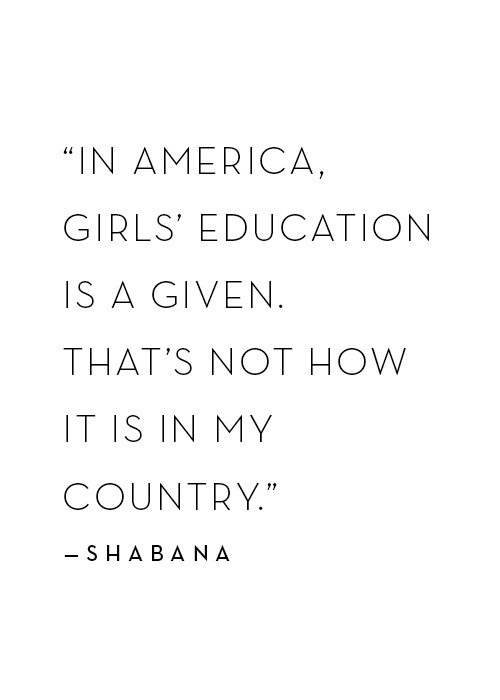 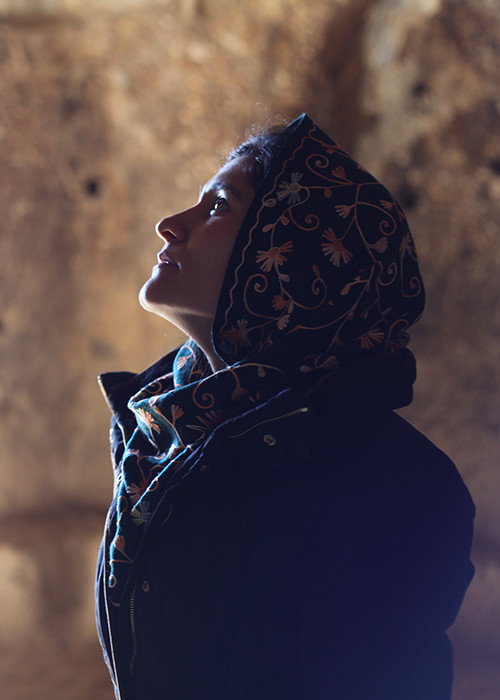 What made you want to create new education opportunities for girls in Afghanistan?

Nearly 3 million girls are out of school in Afghanistan. These are the girls I grew up around, this is the environment I grew up in; I’ve been so lucky, so fortunate, and I think it’s impossible not to feel compelled to do something.

It’s also a fact that investment in girls’ education comes with an enormous rate of return: girls who are educated marry later, have fewer and healthier children, and invest as much as 90% of their income back into their families. This, by the way, is one of the key reasons why SOLA begins the boarding school process in the 6th grade: adolescence is a critical time in a girl’s life, especially in Afghanistan, and if a girl is in school during this time, the chances of her completing her education and marrying later rise dramatically.
A girl who is educated will never raise her children without education; an educated girl changes the future of her family. I believe that the most effective antidote to extremism is to create the best-educated generation in Afghanistan’s history. Our girls today – the women of tomorrow – are the ones who will make it happen.

What is the state of girls’ education in Afghanistan today?

63% of the teenage girls in my country can’t read. Think about that for a moment. The illiteracy rate for teenage boys is about half that. 66% of girls ages 12-15 don’t attend school. That number is around 40% for boys of the same age. ⅓ of girls in Afghanistan are married before they turn 18.

These statistics come from a recent Human Rights Watch report, and I consider it a must-read for anyone interested in girls’ education in Afghanistan. Among other things, it details the very serious issues we have with school infrastructure: for instance, more than 40% of schools in Afghanistan have no buildings whatsoever – classes are held in tents or completely outdoors. 30% of schools lack safe drinking water; 60% have no toilets.
I think a lot of American audiences are surprised when they learn how important it is for Afghan girls to have female teachers. It’s not something that’s thought about too much in this country – but in Afghanistan, many families, especially in rural areas, won’t allow their daughters to be educated by men. These girls will be pulled out of school if there aren’t any women to teach them. So now that you know this, consider the fact that there are 34 provinces in Afghanistan, and in 17 of them – in half of them, in other words – less than 20% of the teachers are women.

How is SOLA making an impact?

SOLA, back when we launched in 2008, was set up to be an organization that would secure scholarships and study-abroad opportunities for Afghan students. That’s what we did, and we did it well: over the years we’ve secured more than $9 million in scholarships for SOLA alumni.

But we changed our direction in 2016, deciding to focus on a boarding school model solely for girls as I mentioned earlier. For our inaugural class of 6th graders in 2016, we received 117 inquiries from families and 70 applications, and we accepted 26 students. For 2018’s class of 6th graders, we received 800
inquiries and 130 applications, and we accepted 16 students. We’ve become more selective, and certainly the growth in our applicant pool suggests that there’s growing interest across Afghanistan in what we’re doing.
We recruit students from across the country and across ethnic and religious lines: our student body hails from 23 of Afghanistan’s 34 provinces, and all major ethnic and religious groups are represented. Of course, this is a strategic decision on our part: ethnic and religious tensions contribute significantly to my country’s political instability, so we make a point to bring girls of all backgrounds together at SOLA. 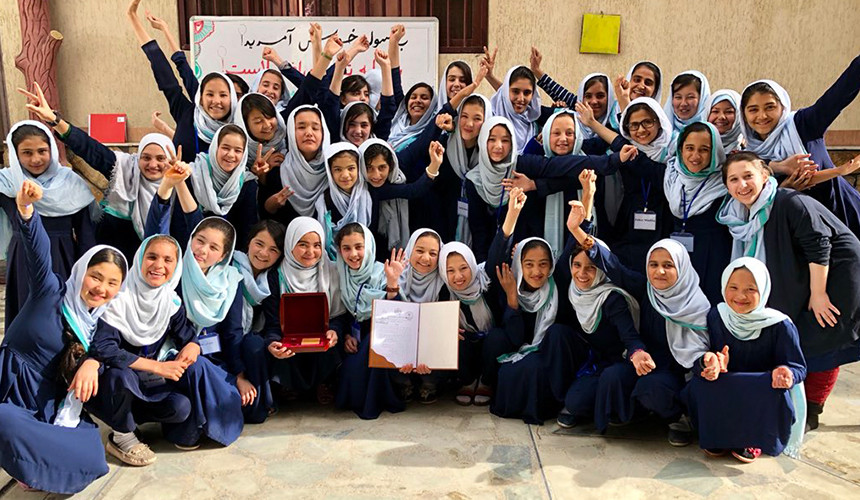 Students at SOLA with the Malalai medal, presented to Shabana by President Ashraf Ghani for significant achievements for womenâs rights.

Is there a moment since you started SOLA that has stuck with you?

Let me preface my answer by saying this: one of the reasons we operate SOLA as a boarding school is to mitigate the risks girls face by traveling to and from school. Girls can be harassed by men as they’re walking, girls can be kidnapped in areas where the security situation is tenuous; girls can even have acid thrown in their faces by extremists as a warning to other girls who want an education.

These are the very real dangers that girls face in Afghanistan, and although boarding at SOLA minimizes those dangers, every girl who attends is taking a risk – and so are their families. Not too long ago, one of our students came to me, crying. Her extended family had learned that she was attending SOLA, and her father had been told that his life was in danger if he continued to educate his daughter.
You asked if there is a moment at SOLA that has stuck with me. Here it is: my student, with tears in her eyes, told me that she was planning on leaving school so that her father would be safe – and then she said this: “They can take me to the hottest sun or the coldest snow, but I will never stop studying.”

SOLA is not about me. It never has been. SOLA is about parents and children, mothers and fathers and daughters, who see a new way for the country that all of us love so much. We were able, fortunately, to work out a plan that allowed this student to stay with us – and that moment with her is one I’ll never forget.

What are SOLA’s goals for the future?

Following this model, our goal is to operate an internationally recognized boarding school of approximately 175 girls in grades 6-12 by 2022, and we’re already making plans to build a permanent and secure campus in Kabul to give us the space to pursue this kind of growth.