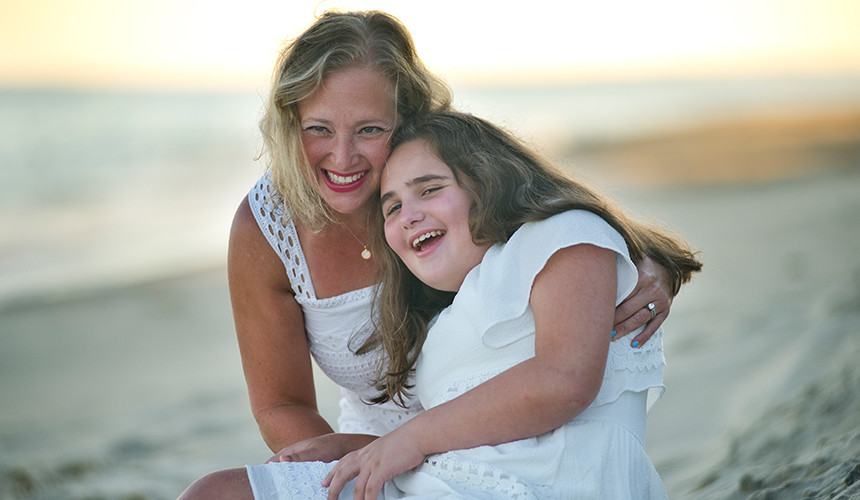 When Rachel Rothschild’s daughter Zoe was diagnosed with Rett Syndrome, a rare neurological disorder, it turned this mom’s world upside down. Faced with the reality that there was no known cure for Rett, she and her husband vowed to make a difference and do everything in their power to find a cure for Zoe and the thousands of other girls with Rett. They joined the Rett Syndrome Research Trust, an organization dedicated to funding Rett Syndrome research worldwide. Rachel, a fashion industry veteran, started a yearly benefit called Reverse Rett in partnership with some of the fashion industry’s biggest players to raise money and awareness for this devastating disorder. Read more about Rachel’s mission and her daughter Zoe in our interview below and shop now to support the Rett Syndrome Research Trust.

Your daughter was diagnosed with Rett Syndrome at age 3, what were the signs leading up to her diagnosis?

Zoe didn't have what might be considered the "typical" Rett Syndrome regression. We first received services for Zoe because she was a late walker, but by 20 months she was walking. The therapists thought once she walked she would start to talk but that never happened. She started to receive more speech, PT and OT intensive therapies (almost 20 hours per week) but had little to no improvements. The therapists were stumped and referred us to a specialist who still didn't have strong thoughts. We then met with a neurologist who encouraged us to get "rule out" genetic testing, but he too didn't think we had too much to worry about. We knew Zoe didn't seem like other children her age, but nothing could prepare us for that phone call…

Zoe was diagnosed on her third birthday, the day after I gave birth to my son Cooper. My husband received a call from our pediatrician in the hospital and we went from the pure joy of just having had a baby to utter devastation.

What are the telltale signs of Rett Syndrome?

Rett is a devastating neurological disorder that afflicts girls almost exclusively as it is caused by a random mutation on the X chromosome. It is considered a rare disease, with 1 in 10,000 female births affected. More than 16,000 girls and women in the U.S. and 350,000 around the world have Rett Syndrome. Except for breast cancer, no other disease specific to women afflicts more than Rett. Usually girls with Rett appear completely healthy and normal at birth and during the first year of life. Looking back at Zoe's pictures from her first two years of life can be painful, it all seemed and felt so innocent with the whole world ahead of her. Girls with Rett often start to lose basic skills including the ability to walk, talk and hold objects. As if that's not enough, girls with Rett then typically develop other physically and mentally painful symptoms such as seizures, extreme anxiety, gastrointestinal issues which often lead to feeding tubes, scoliosis, extreme muscle tension, tremors, and breathing issues.

These symptoms run on a spectrum, some girls, like Zoe, have the ability to walk and suffer less severe health issues but most girls spend their lives in wheelchairs. Perhaps the most devastating is their inability to speak and express themselves. Increasingly, research is showing that girls and women with Rett have normal cognitive function. They have so much love to give yet they are trapped in bodies that hold them hostage from sharing their thoughts, ideas and emotions causing great frustration for the girls and also enormous frustration and helplessness for their families. 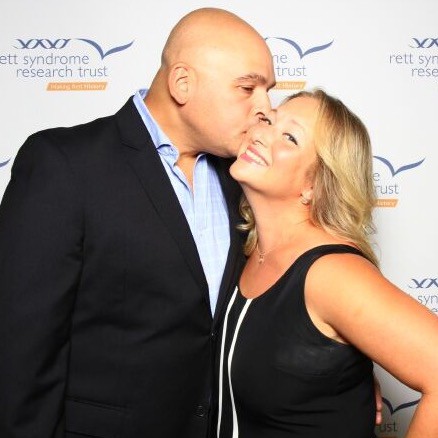 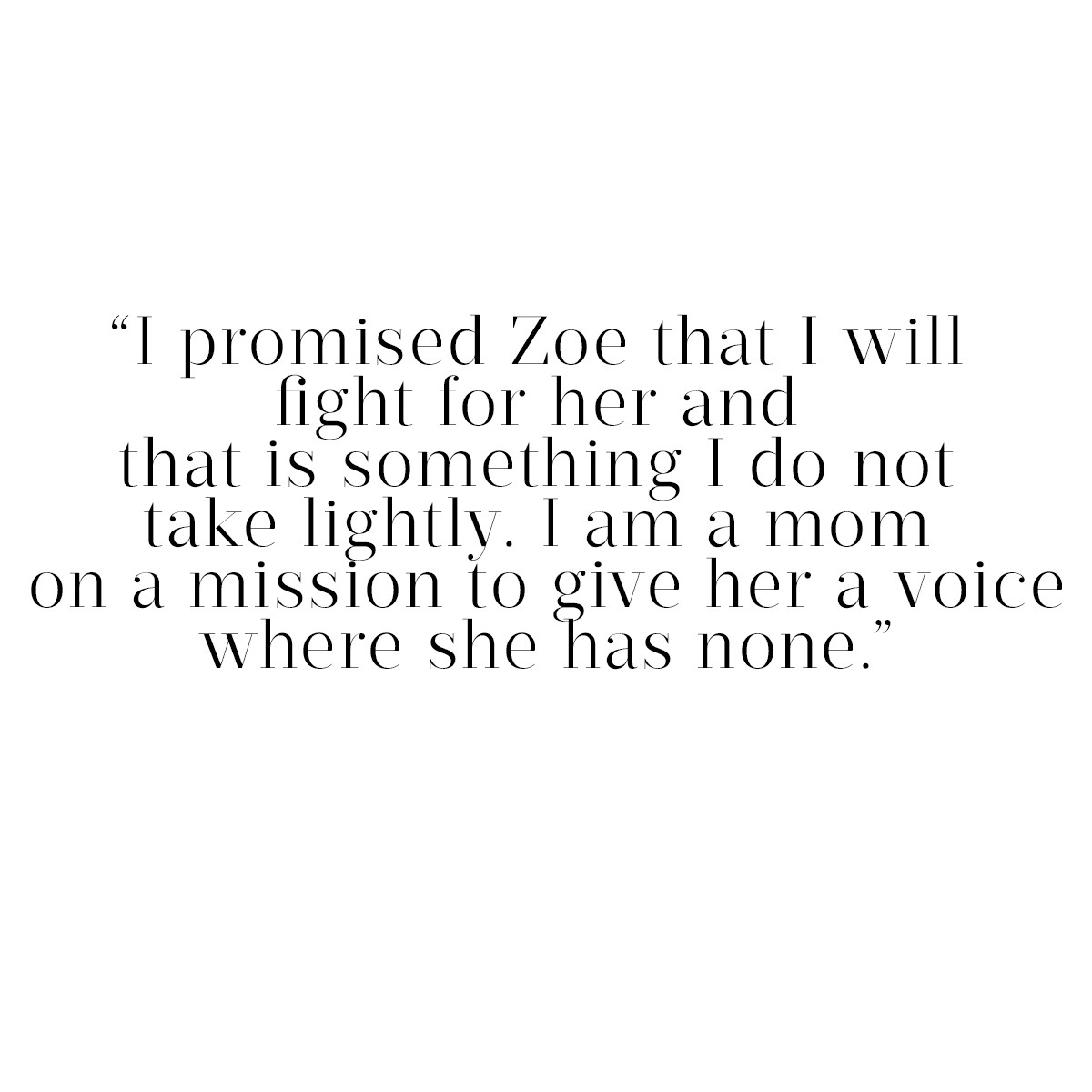 How did you process Zoe’s diagnosis?

At the moment of Zoe'sdiagnosis time stood still. To this day when I think of it I couldinstantaneously cry, it often feels like PTSD; how does one experiencethe pure joy of having a son to then learning your daughter has aseverely debilitating rare neurological disorder with no known cure?Zoe's diagnosis was over eight years ago and lot has changed in the Rettworld since then. At the time, and still to this day, the Internet canbe a terrible place, there was nothing we found about Rett to ease ourfears; especially when what we were reading and seeing didn't presentlike our Zoe.
As a parent you would travel to the end of the earth to help your child; for Rett there was no pill to take, no research study in Europe to fly to. I was left with complete feelings of helplessness.

For almost three years (and even sometimes still to this day), each morning I would anxiously await for Zoe's little feet to hit the ground and start walking. I was living in constant fear of what Rett might steal from her. At times it became hard to distinguish what was Zoe and what was Rett Syndrome and to not allow Rett to define my amazing, courageous little girl.

How did you discover the Rett Syndrome Research Trust? What was it about the organization that you were drawn to?

My husband and I decided to take a little time to feel sorry for ourselves, gain our footing as best we could and then we vowed to make a difference and do everything in our power to find a cure for Zoe. We had a few family friends who unfortunately knew other girls with Rett and they pointed us in the direction of Monica Coenraads, the founder of the Rett Syndrome Research Trust (RSRT). As luck would have it, Monica lived a few towns over from us in Connecticut. Monica came to our home to meet with us and I will never forget that night – she gave me hope and hope was something that until that night had been lost. I didn't personally want a support group, I wanted a cure and RSRT, in my opinion, was just that. RSRT focuses 100% on research toward treatments and a cure. RSRT has minimal administrative expenses; 96% of its funding goes right to research, this kind of low overhead is very rare in non-profits and disease specific organizations. 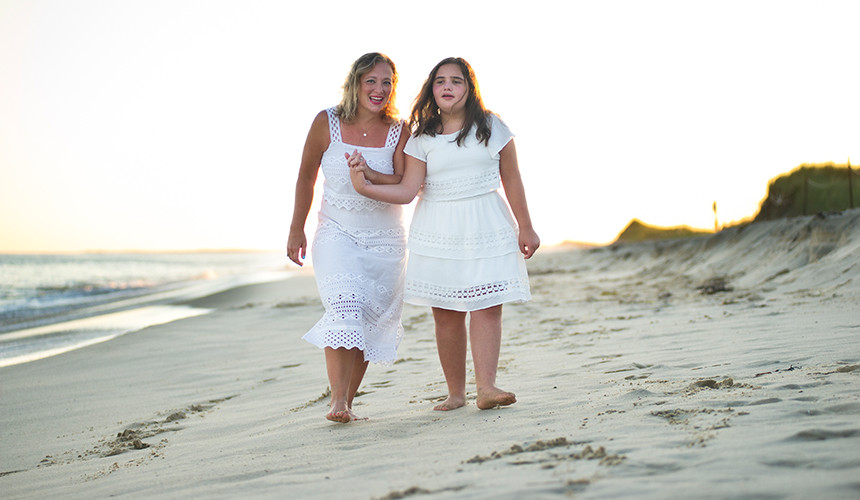 How does RSRT work to further research and provide support for families dealing with Rett Syndrome?

Just knowing that RSRT is here and pushing the research towards a cure provides tremendous hope for families. Monica and RSRT's staff are extremely accessible at all times. You call them and they answer the phone right away and will answer any question about research progress.

RSRT supports several clinical trials that are testing drugs that could improve multiple symptoms. But maybe most exciting are the projects like the Gene Therapy Consortium. This is a collaboration of four labs that are developing ways to use gene therapy and actually reverse Rett. The thought is that Rett is unlikely to be cured by a scientist working in isolation. Researchers need to share data and ideas across all disciplines. The progress is remarkable, just a few years ago there were few scientists working on Rett, now it has become a high-profile disease in the scientific community, in large part because of RSRT and because there is a high likelihood of impacting lives.

Tell us more about the benefit Reverse Rett in New York City and your involvement? How has the fashion industry supported this initiative?

My husband and I were talking about what we could do to raise money and awareness and came up with the idea for Reverse Rett NYC. Because of my work in the fashion industry, I contacted a dear friend who worked at DVF and she arranged for us to have a meeting, present our case and ask if we could hold the first Reverse Rett NYC at the DVF studio. After two successful years at the DVF studio, I met Andrew Rosen of Theory and he generously allowed us to have the benefit at the Gansevoort Street store.
Our events have large silent and live auctions which are filled with donations from so many design houses. The fashion industry has literally wrapped their arms around me and my cause. I could not have been prouder to work in the industry. I am also proud to say we have raised close to $3 million over the past seven years.

This year's event will be Monday, November 7th at Capitale in NYC. Purchase tickets here.

What is your advice to parents of a child with Rett Syndrome?

My biggest advice, especially for a newly diagnosed family, would be to try to stay off of the internet. I found it very helpful to talk with positive people. It was too much for me to hear other family's struggles in the beginning. I knew joining groups and blogs brought me to bad places, but for other families it is what they need as a touch stone. Try to remember, which is very hard, that your child is still your same child the day after you receive the diagnosis. Remember her sense of humor, her intelligence, her kindness and charm are all hers and they don’t belong to Rett.

How has Zoe changed your life?

It is hard to put into words how Zoe has changed my life. Zoe lights up the room with her smile, she is often able convey more with a look in her eye than I am able to with a thousand spoken words. Every minute of every day is a struggle for Zoe, yet she continues to persevere; she has the courage and strength of an army. She has shown me how to appreciate the little things and to enjoy the moment without looking too far ahead. I promised Zoe that I will fight for her and that is something I do not take lightly. I am a mom on a mission to give her a voice where she has none. The only way I am able to sleep at night and wake up every day is knowing that I am doing something to keep my promise to her by raising funds and awareness for RSRT and the reality of hope they have provided us in finding a cure. 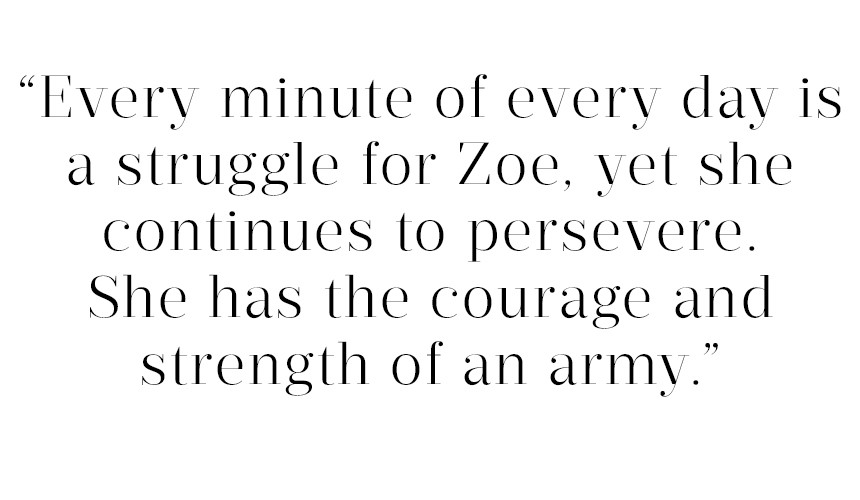 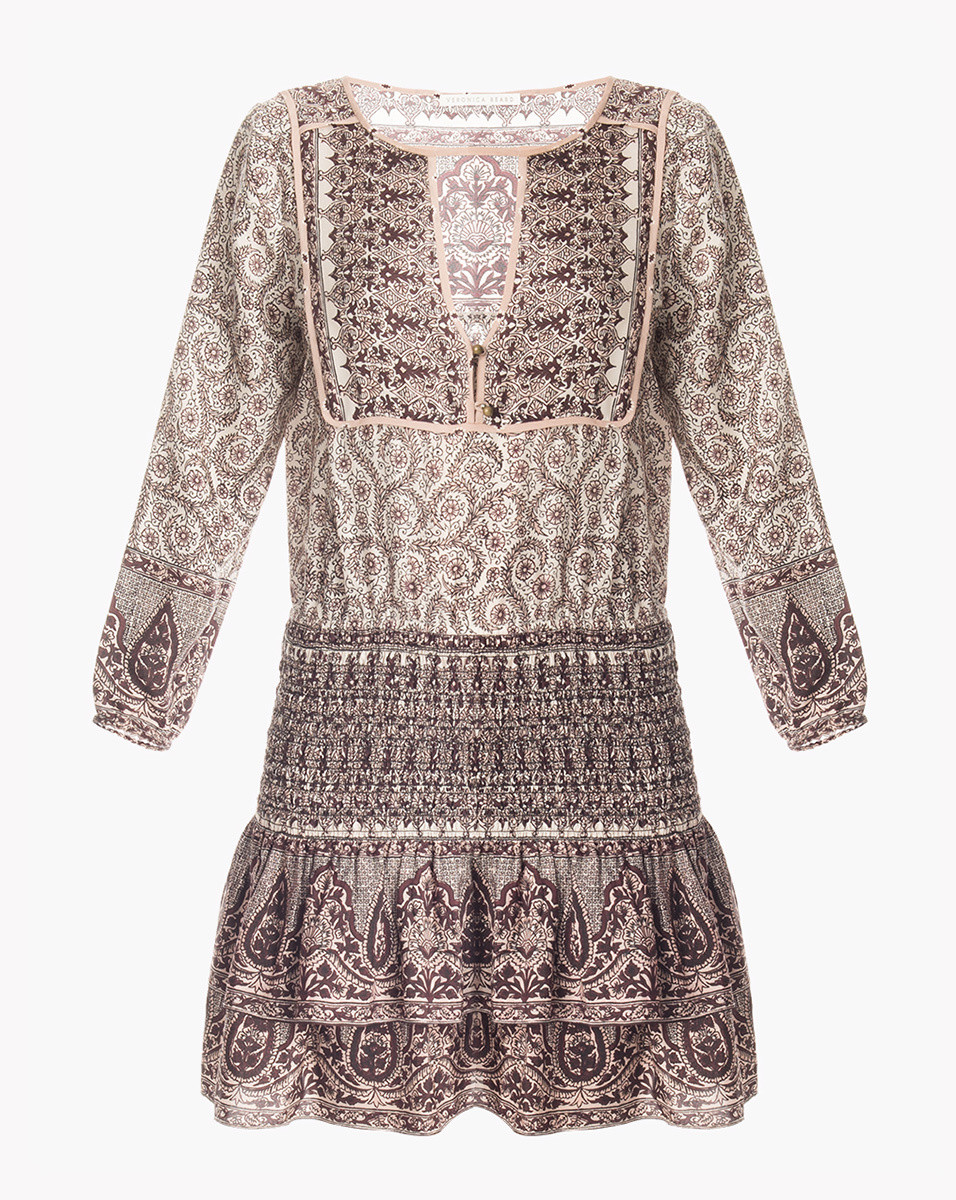 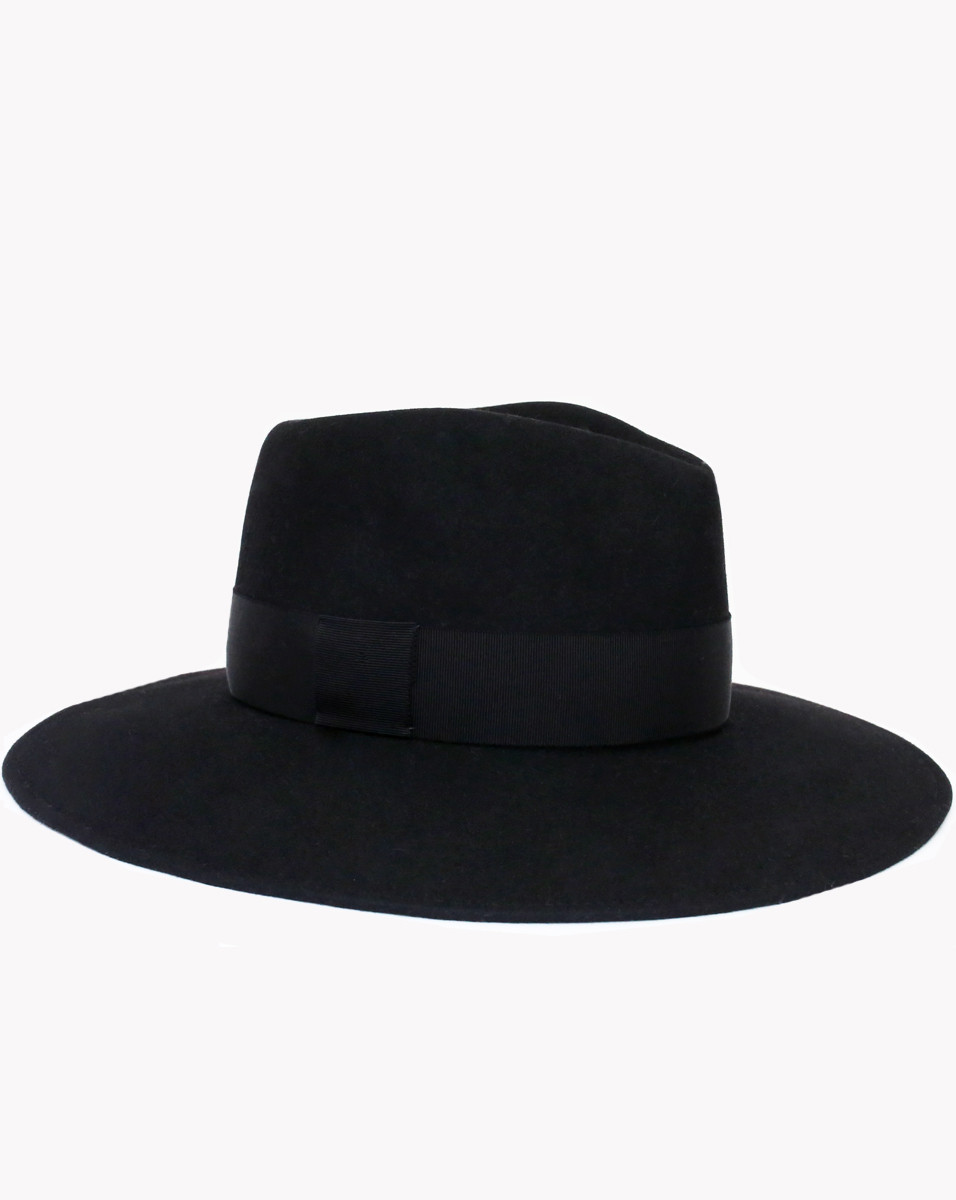 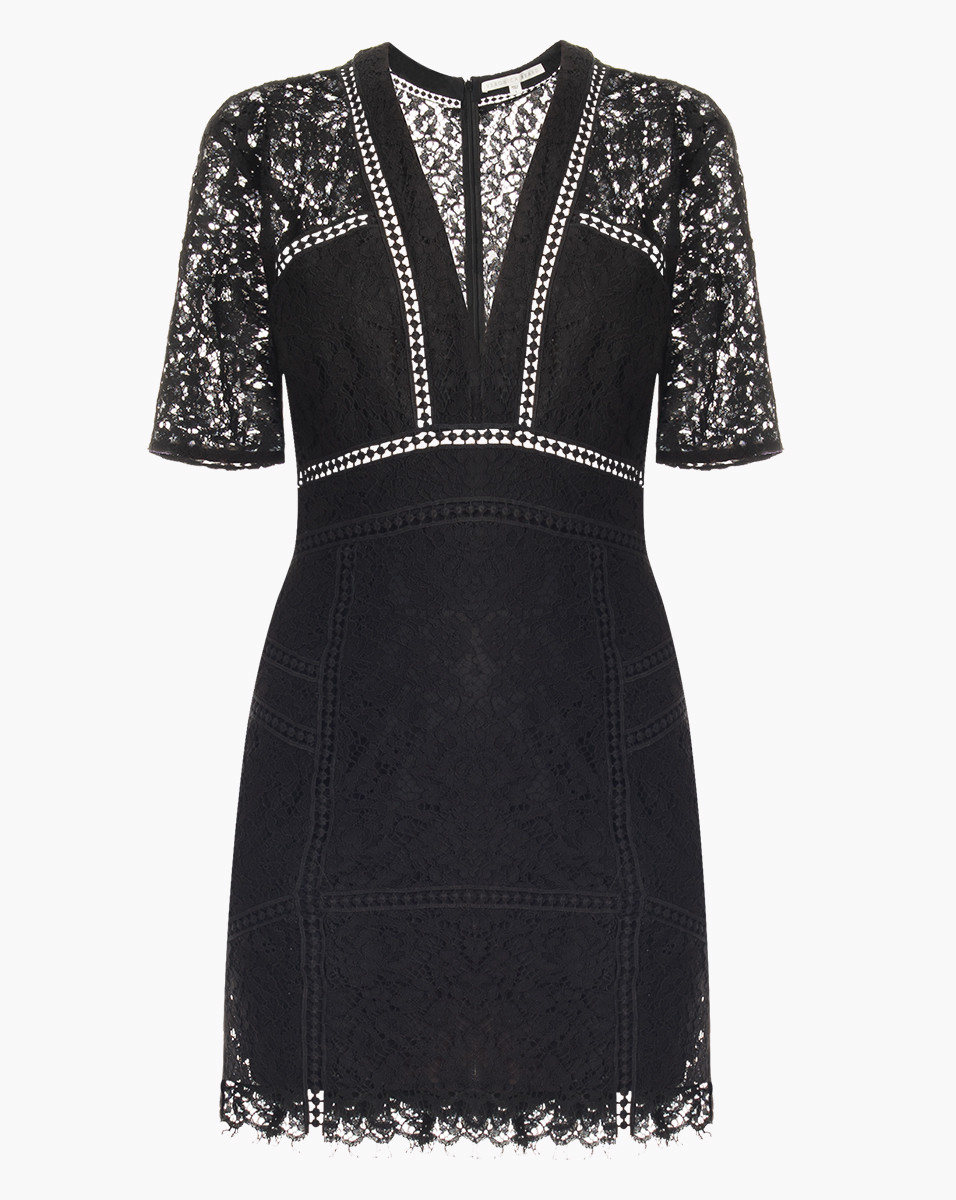 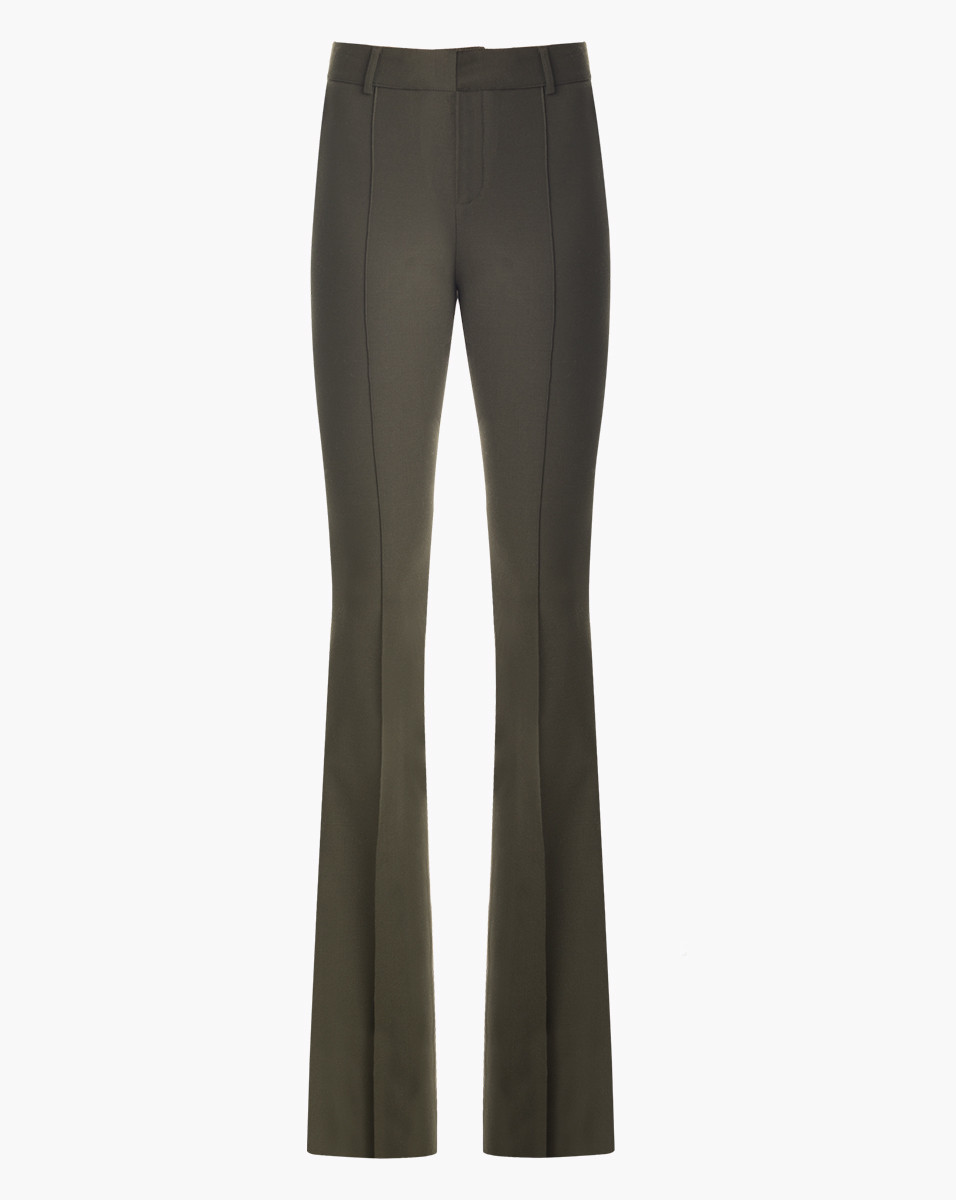