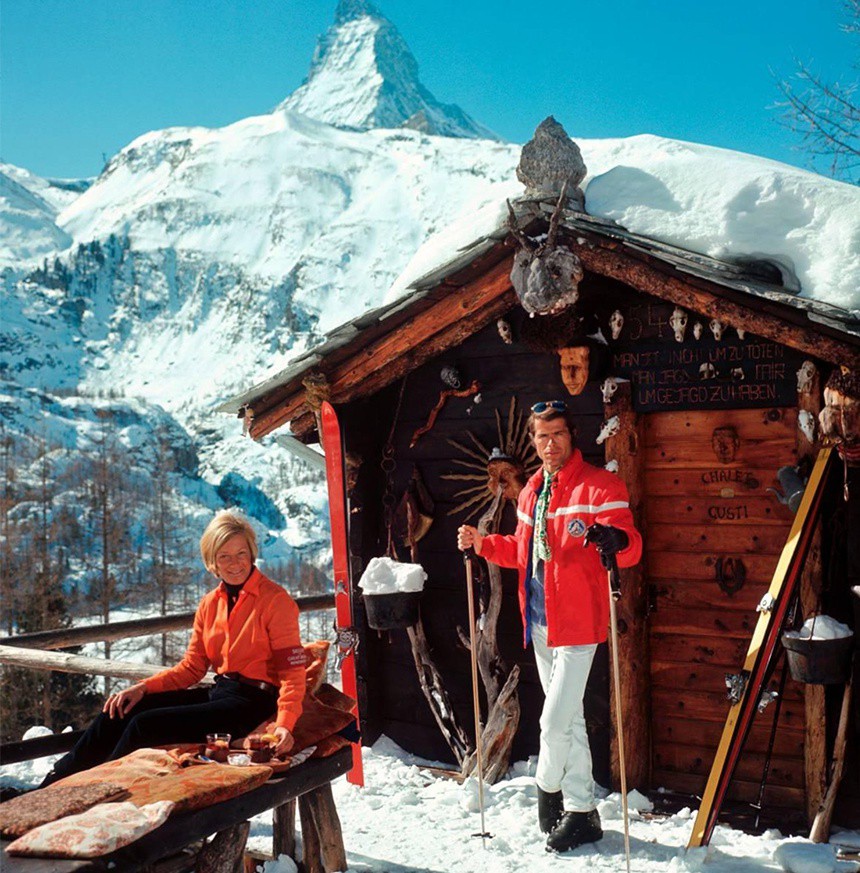 Skiers outside Chalet Costi in Zermatt, Switzerland, 1968, photographed by Slim Aarons
Whether you're a novice snow bunny or an extreme skier—or just simply want to indulge in la vie après-ski—here are some of our favorite places to hit the slopes.

The vistas here are absolutely breathtaking—Cortina D'Ampezzo is set against the Dolomites mountain range, the only one to be christened a UNESCO World Heritage Site. You can spot it in such films as The Pink Panther (1963), with Peter Sellers, and the James Bond outing, For Your Eyes Only (1981).

Aspen is synonymous for the best in ski—and après-ski—culture in the U.S. After you get your thrills on one of the biggest vertical drops in the Americas, settle into a cozy corner at Cloud Nine Aspen Bistro for some fondue and bubbly.

If you live to ski, Whistler Blackcomb has one of the longest ski seasons around, from November to May, and one of North America's biggest skiable acreage. Fun fact: The two mountain peaks—Whistler and Blackcomb—are linked by the Peak 2 Peak Gondola, which, until 2017, held the word record for the longest free span between towers.

Verbier appeals to both the luxury set—Sir Richard Branson has a property here—and the extreme skier. The Piste de l'Ours is host to 29 World Cup ski races and, for the true adrenaline junkie, there's Tortin. To quote The Telegraph: "In high season, the moguls that develop here are nothing short of horrible. The further you go, the more frightening they become."
Labels:Travel,Guide,Skiing,Après-Ski,